“Religious Communities Across Space and Time in Africa, Europe, and the Middle East” 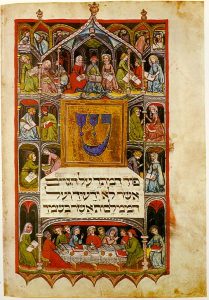 The Marco Institute’s 18th annual symposium brings together scholars of the medieval and early modern world to examine how religious communities conceptualized and imagined themselves. The symposium will feature specialists whose geographic interests include Africa, the Middle East and Europe. “Community,” therefore, will be interpreted broadly to include not only world systems such as oikumene, ummah or ecclesia, but also local communities such as individual mosques, monasteries or synagogues. Furthermore, papers will investigate how interactions between religious communities shaped their identities and experiences. The symposium will explore the diversity and complexity of pre-modern notions of religious communities across a wide range of geographic, confessional and temporal boundaries.

The “Religious Communities” Symposium is hosted by the Marco Institute for Medieval and Renaissance Studies at the University of Tennessee, Knoxville. Symposium committee: Manuela Ceballos, Matthew Bryan Gillis, Felege Yirga.

A detailed schedule will be available in late 2021.

“The Jewish umma: MENA Jewry and the Development of an Islamicate Community”

The 2022 symposium will be held in person at the University of Tennessee. The event is free and open to the public.

About the annual Marco Symposium

The Marco Symposium is held every year in March or April. The Symposium brings leading experts in their field to the University of Tennessee for two days of talks on that year’s theme. A round-table discussion by all the participants concludes the weekend.

The Symposium is Marco’s signature event of the year, and typically attracts members of the larger Knoxville community in addition to students and faculty at UT and scholars from across the region. The theme of the Symposium changes each year. Faculty who are interested in submitting a proposal should contact marco@utk.edu

Free street parking is available in the neighborhoods around campus (e.g. Fort Sanders), but cannot be guaranteed. Guests can also get to campus via the free trolley from downtown.