2019 Symposium: Death and Dying in Medieval Judaism, Christianity, and Islam 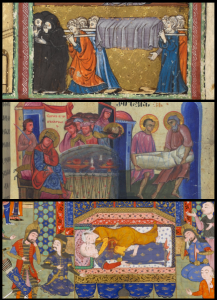 In recent years, approaches to death and dying have become a subject of increasing concern both to scholars and the public. As medical advances in the western world have prolonged lifespans, fundamental questions of ethics and ontology emerge. Which bodies, which lives, will receive expensive interventions and who has the authority to make such decisions? When extending life via automated machinery, where does humanity end and robotics begin? And at the most basic level: what does it mean to die well, to make peace with one’s transition from life to death, from community to invisibility? There is now a cottage industry of books, TEDtalks, and even “death cafes,” dedicated to fostering conversation about this subject that so many of us simply seek to avoid, fear to confront.

The 2019 annual Marco symposium will convene a group of scholars of international stature to explore these questions from the perspective of deep religious history. Our premodern predecessors confronted processes of death and dying by elaborating striking rituals, poetry, funerary art, and institutions of communal caregiving. This symposium represents one of the nation’s first gatherings of specialists in medieval studies to examine collectively the theme of death and dying from the inter-religious perspective of Judaism, Christianity, and Islam. They will present research on such topics as hospital foundations, bedside care, prayers for the dead, memorials, dissection, and reliquaries. Their approaches to the dead and the dying have much to inform our own culture about what it means to confront this ultimate reality that unites all humans, past and present, near and far.

Click here to view a PDF version of the full 2019 Symposium program.