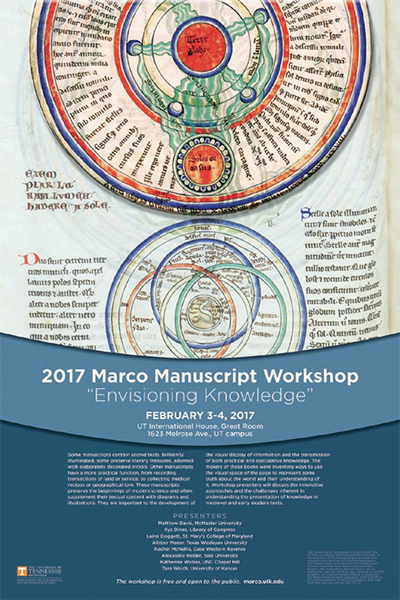 Some manuscripts contain sacred texts, brilliantly illuminated; some preserve literary treasures, adorned with elaborately decorated initials. Other manuscripts have a more practical function, from recording transactions of land or service, to collecting medical recipes or geographical lore, to marking days and years, to charting the scope of the earth or the course of the heavens.

These manuscripts may have a more utilitarian appearance, but they often supplement their textual content with diagrams and illustrations, charts and maps, tables and lists. The makers of these books were inventing ways to use the visual space of the page to represent, in one way or another, some truth about the world and their understanding of it, and in the process, they helped map out the pathways of modern science.

The 2017 Marco Manuscript Workshop featured a lively weekend of discussion on the subject of “Envisioning Knowledge” in the medieval and early modern periods.