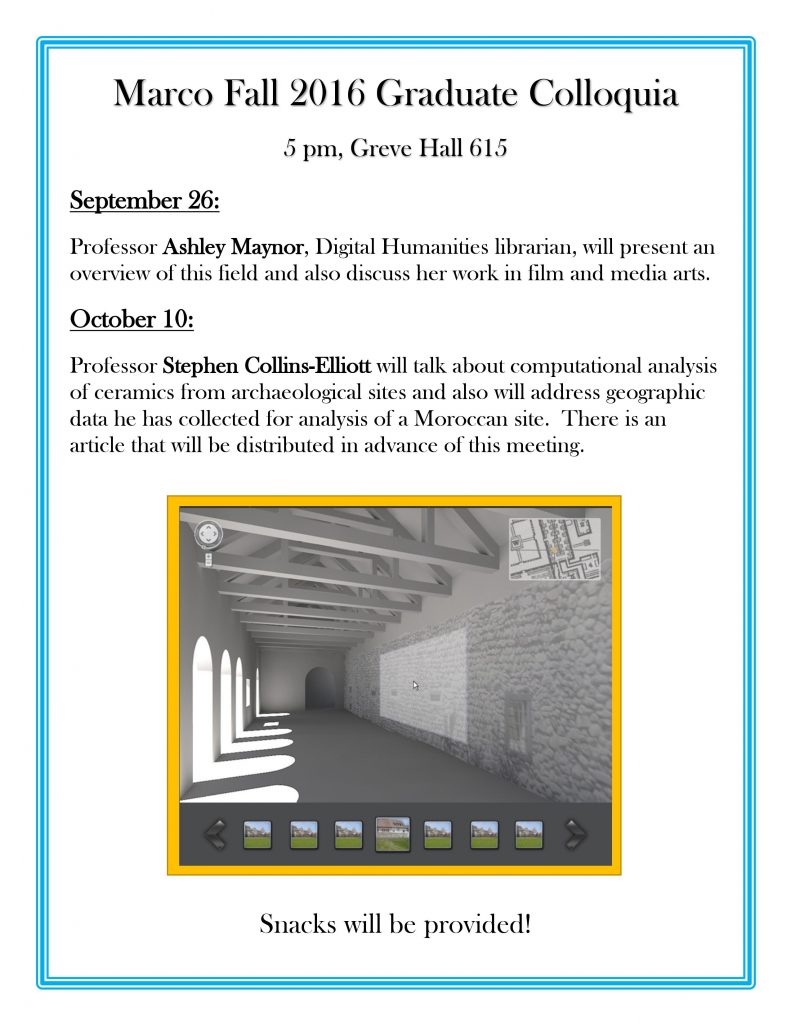 Late in the Fall semester, among the piles of coffee-stained drafts, student papers, folders of articles, and dog-eared primary sources on my desk, are these strange and new-to-me creatures called grant proposals. I’m entering an exciting stage in my life as a graduate student, otherwise known as end-stage moneylessness, or the year of  ‘if-you-ask-me-again-when-I’m going-to-be-finished-with-my-dissertation-I will-punch-you.’ Optimistically,  I like to think of this time as an exercise in trial and error, perseverance, time-management, self-discipline, and all sorts of other hyphenated clichés that refer to the refined moral fiber of a successful academic. Luckily, Marlowe’s Hero and Leander, one of the primary sources for my dissertation, explains why I am in this situation. It goes something like this (note: I’ve embellished it a bit to help with the mythological jargon):

A long time ago in a land far away lived a young, pretty boy named Leander (he was so pretty that people thought he was a girl). In an attempt to please his thirsty and demanding girlfriend Hero, who was refusing to sleep with him, Leander steals a bottle of Nectar (an expensive Greek vodka) from Hebe (personal waiter to the chief god). Jove (a chief god and famous record producer), angry about the stolen bottle, fires Hebe. Poor, sad, unemployed Hebe complains to his friend Cupid (also a young, pretty boy) and the two conspire together to get revenge. Cupid fires love-arrows at Jove and his collaborators The Destinies (a famous, all-girl punk band who runs the world). As a result, they all fall in love with Mercury (a guy who delivers books – I know, random). Follow me so far?

The Destinies shower Mercury with expensive presents, including a knife that “shears the slender threads of human life” and some sort of engine that keeps earth suspended in mid-air. Mercury is still not satisfied, however, and demands that Jove be kicked off his throne in heaven (i.e. fired from the record company) and Saturn (a wealthy trendsetter who throws elaborate parties) instilled in his place. This they grant, but Mercury is unfaithful (sleeping with a hussy named Ignorance) and The Destinies decide to take their gift back and restore Jove. Still with me?

Angry at both Mercury and the idea of love in general, The Destinies take their wrath out on one of Mercury’s particular friends: Learning (the guy who writes the books that Mercury delivers). As The Destinies can tell everyone what to do, they force Learning into an arranged marriage with an ugly girl named Poverty. Because of this sad relationship between Learning and Poverty, Marlowe (the poet) tells us, “And to this day is every scholar poor.”

So, as scholars are descendants of Learning and Poverty, writers of dissertations (like myself) generally don’t have any money and thus must tear themselves away from Renaissance epyllia to beg on the streets I mean uh in rooms of educated people who approve grants in the humanities. Basically, this means I am forced to describe my dissertation in two to three single-spaced pages. As a person not known for brevity (see the narrative digression above), this is a rather daunting task. These proposals ask me  to explain the nuances of my topic, how long it’s going to take me to finish my dissertation, why exactly I would like to receive this particular fellowship and how the purpose of my study can be  justified intellectually (as in ‘why does poetry matter?’). At this point in the dissertation process, I’m writing the second chapter. This means I have just finished the introduction. Metaphorically, I’m smooshing around a piece of clay that is starting to look like an actual thing, but just barely. In the meantime, I have to assert its thingness. And its thingness must be asserted without using “jargon.” In other words, it should make sense to smart people who don’t necessarily study literature.

Having sent out two grant proposals in the Fall of 2012 and with several more in front of me for the Spring of 2013, I have yet to figure out this thing called jargon. I guess it’s because as highly trained scholars in our field, these terms have become second nature to us. It’s a language that we speak (and I think a remarkably beautiful one), but how does one translate this language to people in other disciplines? My physician, for example, making small talk at my last checkup, asked “What is the subject of your thesis?” My response (“neoteric poetics in the early modern epyllia”) prompted him to look at me like I had just escaped from a zoo and was mooing at him. I quickly revised it: “I study poetry,” but I don’t think that made any sense to him either.

So, what exactly is jargon? Can I use words like metaphor, poetics, mimesis, allegory, galliambic (well maybe not the last one)? In an attempt to figure out the meaning of jargon and think of ways to avoid it, I looked it up in English major’s Bible, otherwise known as the Oxford English Dictionary.

1. The inarticulate utterance of birds . . .

4. A conventional method of writing or conversing using symbols otherwise meaningless . . . having an arbitrary meaning.

6. Applied contemptuously to any mode of speech abounding in unfamiliar terms, or peculiar to a particular set of persons.

Um, okay. Here’s what I took away from this: Try and make sense. Speak English. Think about what a reasonably college-educated person should know about your area of expertise.  This information should be easy enough, because most of us teach rudimentary classes in our field. I know that I’ve taught countless composition classes and literature survey courses in which I regularly reminded my students the meaning of terms like metaphor, allegory, sonnet, alliteration, iamb, simile, etc. Thus, at least for the ones that pay attention, a person with a bachelor’s degree can reasonably be expected to know what they mean. Galliambic? Maybe not. So, think about what your students know, and go from there.

Also useful is this concept of “intellectual justification.” If you read the Chronicle of Higher Education regularly, or the New York Times, or any respectable publication that discusses education, you should already know that if you would like a job teaching in the humanities, you’d better be prepared to justify your existence. Why should you teach the material you are teaching? How it is going to contribute to a diverse and hyper-industrialized culture preoccupied with scientific and technological advancement? Why does what you do matter in the larger scheme of things? How does it have the potential to enact change? Situate what you do in a larger context that crosses disciplinary boundaries, and you will not only be free of ‘jargon,’ you will have practiced the answers to questions you will most likely be asked for your entire career. And perhaps, you will finally be able to articulate why it is that you love what you do.