Marco is very fortunate this year to have Professor Sara Ritchey join our community. A graduate of the doctoral program at the University of Chicago, Ritchey spent the past 10 years in the history department at the University of Louisiana at Lafayette, where she won an armload of grants and fellowships and established herself as one of the leading scholars of medieval thought on gender, medicine, and sanctity.

Students of the Middle Ages have long associated late medieval piety with the human body, especially (in the case of women mystics) with eating and, more particularly, not eating. Ritchey’s first book, however, Holy Matter: Changing Perceptions of the Material World in Late Medieval Christianity, published in 2014, began with trees. Ritchey noticed trees were everywhere in late medieval texts. From there, she was drawn to broader questions about the physical world. Working from a dizzying array of sources—music, plays, theological treatises, agricultural projects, architectural plans, and manuscript illustrations—Ritchey ingeniously finds in earthly expressions of piety revelations about the Incarnation, of a world in the process of transformation, created anew into the Holy Matter that was Christ. 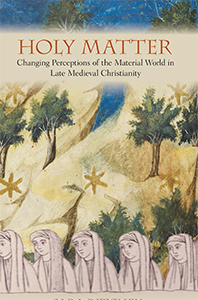 What drew such a talented scholar to Knoxville? “The faculty!” Ritchey answers immediately. “UT is one of the few universities in the United States that offers such a rich concentration of scholars working on medieval and Renaissance studies. It’s an enriching experience to be able to sit down for coffee each week to learn more about the impressive research happening in various corners of the field.”

Ritchey’s current work, tentatively titled Salvation is Medicine, combines her interests in theology and the natural world with a focus on medicine. As she describes it, she will focus on the healing practices “that took place in the dozens of hospitals, leprosaria, and infirmaries founded and staffed by beguines and Cistercian nuns in the 13th-century southern Low Countries, and into the historic and historiographic circumstances that have obscured that knowledge from our understood histories of medieval medicine.”

As Ritchey completes this ambitious project, she will be offering a variety of survey courses and seminars to students at UT, including classes on hagiography (that is, writing about saints), which she describes as her “dream class.” The scholars and students at Marco are excited as well and could not be happier to have such a talented, creative, and dynamic scholar join our community here in Tennessee!