Marco in the Field

In summer 2017, the Marco Institute cosponsored two archaeological excavations run by Marco-affiliated faculty members with teams that included UT students, staff, and alumni. These important international collaborations preserve and promote the cultural heritage of the Roman and medieval Mediterranean world.

UPDATE FROM THE FIELD
“We have uncovered remains of all the walls, found the door, encountered a surprise extra room to the north of the sanctuary, excavated two chancel screen holders in the church apse, and have confirmed, without a doubt, that the building is a church as indicated by the deeply carved cross in one of the apse stones.”

The ‘Ayn Gharandal Archaeological Project is directed by UT faculty members Erin Darby, assistant professor in the Department of Religious Studies, and Robert Darby, lecturer of art history. The team is excavating a settlement in southern Jordan whose period of occupation stretches from ancient Rome into the Middle Ages. The site includes a Late Roman fortification and bathhouse, as well as burials from the Early Islamic and Mamluk periods. The main objective of the 2017 season was to excavate a fourth-century church. This is one of the oldest churches preserved in the Middle East and is one of the only examples excavated from a fourth-century military fort. 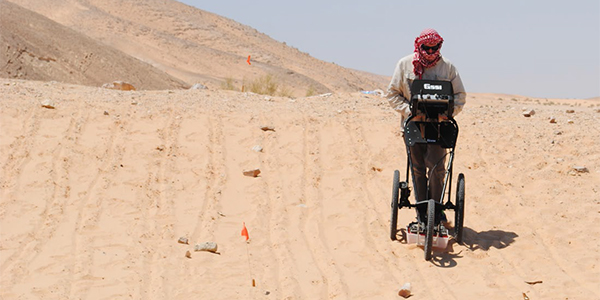 The site’s Geoarchaeologist, Howard Cyr (UT Archaeological Research Laboratory) uses ground penetrating radar and a gradiometer to help reconstruct the natural history of the site and reconstruct the built landscape during the Byzantine period.

Gardens of the Hesperides: The Rural Archaeology of the Loukkos Valley, Morocco 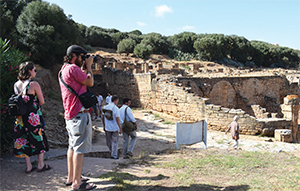 UT undergraduates and alumni joined an international team of archaeologists to gain first-hand experience of a field survey in Morocco. The survey team is co-directed by Stephen Collins-Elliott, assistant professor in the UT Department of Classics, and Aomar Akerraz, director of the Institut National des Sciences de l’Archéologie et du Patrimoine, Rabat. The team is investigating archaeological remains in the countryside around Lixus, the oldest city in northwestern Africa. Students also visited several important sites for Moroccan history and heritage, including the port city of Tangier, and Chellah, a ruined medieval city near Rabat.

“One more year of survey is planned before the start of excavation,” Collins-Elliott says. The team hopes to learn more about how the ancient agricultural economy changed with the annexation of the region by the Roman Empire.