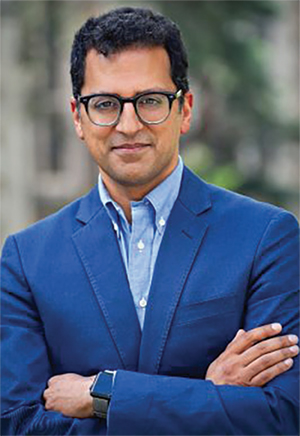 Hussein Fancy is an associate professor of history at the University of Michigan. His work focuses on the social, cultural, and intellectual history of religious interaction in the medieval Mediterranean. Professor Fancy received his PhD from Princeton University in 2008. His first book, The Mercenary Mediterranean, was published in 2016 by the University of Chicago Press. We discussed his most recent project when he visited campus.

You are working on a new book, The Impostor Sea: The Making of the Medieval Mediterranean. Can you tell us briefly what it will be about?

This book is based on four years of research in archives in Spain, Italy, and North Africa. Over that time, I have cataloged and followed the stories of pious robbers, religious impostors, runaway slaves, repentant smugglers, and multi-religious criminal gangs. In particular, I am interested in what the ability to “fake it” tells us about interactions between Jews, Christians, and Muslims in the Mediterranean region.

What first drew you to study the medieval Mediterranean?

Like many, I was first drawn to the Mediterranean region to think about the encounter between the Christian and Islamic world. I was trained as a historian of Medieval Europe and the Islamic world, I considered the Mediterranean the frontier zone par excellence. Over time, of course, I’ve come to see things in less stark terms as implied by something like “encounters.”

In your Riggsby Lecture, you told amazing stories about imposters, liars, and frauds in the medieval Mediterranean. Why do you think they proliferated so in that world?

The Mediterranean was a particularly intense zone of trade and interaction that has certain affordances, which shaped that trade and interaction. That said, it was not the only such zone in the medieval world, and I don’t want to press its uniqueness. Indeed, the abundance of records of smuggling reflects – as much as anything – the survival of documentation.

What archives do you visit when doing research? What kinds of source materials do you encounter in them?

In the Archive of the Crown of Aragon alone, I examined more than 300,000 documents in Latin, Romance, and Arabic. In North Africa, I examined dozens of legal compendia, manuscripts from the twelfth to the sixteenth centuries, that dealt with issues related to interactions between Muslims, Christians, and Jews. In Rome, I examined smuggler’s confessions. And in Genoa, I examined notarial records related to trade with North Africa.

What do scholars get most wrong today when they think about the Mediterranean during the Middle Ages and Renaissance?

The Mediterranean has been approached along two poles: a zone of religious conflict or self-interested trade. These biases reflect the foundations of the historical discipline and continue to form what I call “an intellectual background” for much of contemporary scholarship, my own included. Excavating our own assumption as scholars seems to me as significant a project as archival research.