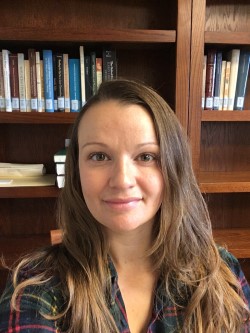 Kyrie Miranda is a PhD student in the Department of Modern Foreign Languages and Literature (Spanish). She holds two MAs (Spanish and French) from the University of New Orleans. Her research interests include medieval and early modern Spanish and French literature, with a focus on capturing nature/animals in both scientific and folkloric traditions, as well as the blurring of borders between elements in the medieval and early modern periods. Her dissertation, with the working title of "Finding Medieval Animals in Early New World Humanist Literature," is an investigation of animal representation in early Spanish literature from the Americas showing how the late medieval period still heavily influenced depictions of the natural world in humanist literature. Her advisor is Dr. Millie Gimmel. She currently is the 2017-2018 Jimmy and Dee Haslam Fellow for Public Humanities, as well as the Course Manager for Spanish 111/112. Kyrie also serves as a GTA for Spanish classes at UT.